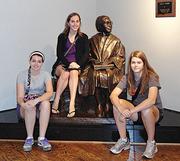 On June 12, at 6:00 p.m., WGBC will host a showing of the 30-minute film Colorblind.  The film is a student made documentary about the Civil Rights Movement and what it means to be colorblind.  The creators of the film, Hannah Davidson, Jamie Garland and Katie Ribant, as well as their teacher and sponsor of the project, Julie Burchett will be there to introduce the film.  Afterward there will be a question and answer session.

Hannah said they first thought that colorblind meant that no one would notice race and everything would be fantastic.  But their trip changed these first thoughts.  They began to realize that the ideal wasn’t to be colorblind but to be able to accept people for who they are.  Hannah now says, “Everyone isn’t the same, but rather everyone is different and that’s OK.”

The film is a result of a history travel trip (Memphis, Birmingham, Selma and Montgomery) offered by Webster Groves High School’s new Chelsea Detrick Experiential Learning Center.  During the trip the students explored many civil rights’ landmarks and museums.  The film was also shown at a national civil rights event in Selma, Alabama.

This entry was posted in Uncategorized. Bookmark the permalink.