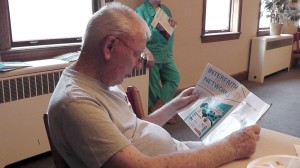 Bill Kuykendall peruses the information about interfaith hospitality networks in the CBF Fellowship! at the Missions, Meals and More meeting on June 18. Judy Holstein led the discussion.

Homelessness increased in 25 states from 2011 to 2012, and Missouri experienced a 56.7 percent increase in the number of homeless families.  This reality and the rise of interfaith hospitality networks to combat the problem were the topics of the June 18, Missions, Meals and More.

In July, the Missions Committee will be raising funds for the Summer Missions Drive.  The goal is to raise $1,000; half of the funds raised will be dedicated to the Bosnian Ministry in St. Louis, which provides a food pantry, and half will go to the Christian Appalachia Project.

This entry was posted in Events, Missions. Bookmark the permalink.